029: Rachna Jain on the Journey to Be Your Truest Self 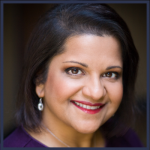 As the owner of two six+ figure businesses built from the internet, Rachna brings real world expertise to helping her clients use the Internet to make money more efficiently as they build their online communities.

Click to tweet: .@rachnajain shares her story to inspire you on Women Taking the Lead! Listen here ▶ www.womentakingthelead.com/029

• Rachna felt in conflict with her upbringing and wanting to pursue her dreams. She’s now times when she had been unconsciously waiting for permission from those around her to step up and lead.

• Shortly after helping to build the practice she was working for to a six-figure business and having earned a raise that was promised to her she was told that her raise was retroactively rescinded. Realizing she was not valued, and in reaction to a betrayal, she had a burst of massive action she quit her job and started her own business.

• Rachna would say her leadership style is a mix of having a clear vision of where she needs to go and supporting the people around her who are helping her get there.

• One of the projects Rachna has going on is the idea of becoming a more optimized and efficient business. She is helping her clients to make more money by doing less.

• Rachna has hobbies that she loves and she makes time for them every weekend. It expresses her truest self and makes a huge difference in how much she can give for the rest of the week.

• Start with Why by Simon Sinek

• Rachna would have made an active effort sooner to not let fear stop her.

• “He who has a why can survive any how.” ~ Victor Frankl