I Declare to Launch!

In the first part of my story I mentioned I experienced a lot of turmoil when people would suggest that I start a podcast. Here’s what got me over the hump.

It was July of 2012 when Corey Wadden’s Entrepreneur on Fire episode was released. Listening to it, I knew that I needed to go public.

I emailed John to let him know I listened to what Corey said and I was declaring that I was going to launch a podcast by November. John replied cc’g Corey on the email and Corey sent a very encouraging note in response.

There it was. I had set the date. That meant it was going to happen, right?

I could give you all my excuses but the fact of the matter was I just wasn’t getting it done. It was a huge undertaking (I didn’t even know that half of it) and my uncertainty and lack of focus kept pushing this to-do to to-morrow.

In October John announced a beta membership community called Podcaster’s Paradise. Looking back I’m laughing over the $197 cost of admission.  It now costs over 600% more and people pay that price gladly.

I’ve got Training, Resources and a Community

I’ll be perfectly honest. I made the investment, I was in the private facebook group, and I started watching the videos and doing the exercises. I had flip charts taped to the wall and a checklist of equipment to buy but my heart wasn’t in it.

I thought I was going to launch a podcast to interview coaches on the art and science of coaching. I’ve noticed that, as a full-time self-employed coach, most of my time, energy and money is focused on the business building and I lose sight of developing my craft as a coach. I didn’t like. I still don’t like it. And yet, it wasn’t enough to get me going.

In February I flew out to LA to attend my coaching mastermind’s retreat in Santa Monica.

And a Boat-load of Resistance to Go With It

During this retreat I was challenged in many ways. One of my challenges came in the form of a group activity. This activity was brilliantly designed to have each individual in the group face down their fears, doubts and stories and then apply their insights in their business.

This particular activity was the flying trapeze. Though strapped in to a harness the platform was about two stories high. Have I mentioned that I am scared of heights. Heights make me queasy.

The flying trapeze isn’t like riding a roller coaster where you are strapped in and you are a passive, yet fully engaged, participant in the event.

The flying trapeze requires you to execute maneuvers while you are dealing with whatever level of terror you are experiencing.

My terror was significant. Enough so that three-quarters of the way up the ladder I tried to climb back down. The instructors did not allow it and I had to climb back up, holding back tears with a pounding heart and sweaty palms.

With the direction of the amazing instructors I was able to swing, tuck my knees up and let my hands go of the bar and…execute a back flip of the bar.

I did it in spite of my fear with faith and a whole lot of guidance.

And Still I Resisted 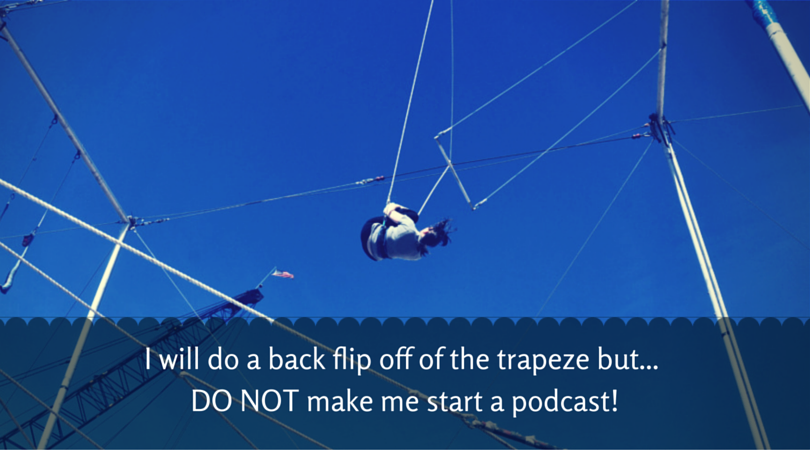 During the weekend my coach worked with me to dissect what my issue was around launching this podcast. She knew as well as I did that this was going to be a great thing for my business.

I had landed on the concept for Women Taking the Lead and had even bought the URL, but I still couldn’t seem to balance the work that was already on my plate with starting this new project.

My coach talked about simplifying, starting with good-enough and just getting it out there – just interview my clients and local business owner on what has made them successful. Great topic. All great advice. It didn’t excite me.

Another coach specializing in helping coaches build there businesses came in as a part of the retreat and we had an opportunity to get some laser-coaching. His guidance was to simplify as well, stop over-thinking it, and create something that could be version 1.0.

I knew it to be good advice as well. But I started to sweat and the corner of my upper lip started to quiver (my weird stress reaction that also occurs when I’m in my third round of later raises at the gym).

Months later, still without a podcast, I joined John’s mastermind group, Fire Nation Elite. I knew this was what I needed. The group is capped at about 75 individuals, many of whom were starting work on a podcast or had just launched.

I had an opportunity to chat with the community leader and, though I did not intend the conversation to go in this direction, he picked up on something pretty quickly. “Jodi, you realize you are essentially starting two businesses. Why don’t you create a podcast for your current clients?”

Rather than just resist I decided to get honest. “Dean, I know that’s the right thing to do but when I think in that direction I start to lose my excitement.”

Dean, God bless him, shifted gears. “If there’s anyone who can do it Jodi, you can.”

He then helped to sketch out a check list and system that could make it happen. I am forever in his debt for believing in my vision in that moment.

Accountability Was and Still Is, the Clincher

Each day in the private Facebook group one member in John’s mastermind group has “the spotlight” on them. They get to share about their business and ask for something from the group, or a call-to-action (CTA).

When my day came I naturally shared about the podcast I was starting and without fail I got responses from the members that were one part congratulations and one part “when are you launching?”

There was no wiggling around such a group, though I did try. I finally gave a vague, “by the end of the first quarter in 2015.”

I am thrilled to no end to report that Women Taking the Lead launched on Wednesday, March 25, 2015.

Come over to iTunes to check out the first episode, 000: Welcome to Women Taking the Lead, and leave a rating and review. It means more than you know and I am terribly grateful.